August 12, 2008
Yesterday's surgery was a new and interesting experience for me even though parts of it were slightly uncomfortable or unpleasant.

After waiting an hour or so, a doctor finally saw us. He did another ultrasound to review my case and confirm the initial diagnosis. And although it's sad, he confirmed that there was really no heartbeat left in the gestational sac. So we scheduled to get a D&C done that day itself.

We had to go through all the standard paperwork, and sign consent forms after having the procedure explained to us in detail. The doctor was very nice and patient in answering our questions and helping us understand what to expect.

After all that, the first thing they did was to put an IV needle into my wrist. This was not very pleasant. 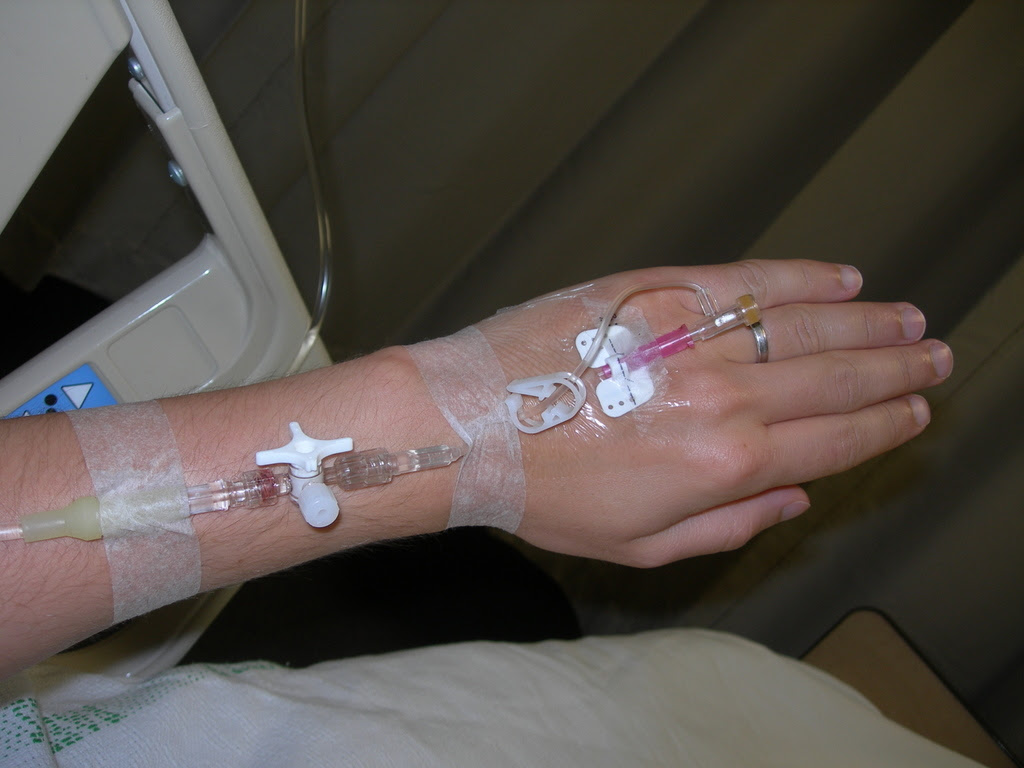 (Above pic not mine - for illustration purpose. Source: Wikipedia)

The nurse prodded my arm and pressed my veins for a while before she declared that she was not confident to do it. She pulled back the curtains and called out "fiddly veins, need some help here!". So another doctor came in to do it. My veins were too small to do it on my hand, so he put it into the side of my wrist. Wah, can really feel it man! Even hubby winced a bit as he watched the needle being poked through my flesh. After that they injected some liquid and I could feel a cold rush snake all the way up my arm. Throughout the rest of the afternoon, I could feel the tension and pinch on my wrist of the IV needle and drip. That was probably the most uncomfortable part of this whole experience.

After that we went up to day surgery, got weighed, blood pressure recorded and all that. And then I had to lie down and have two pills shoved up my *ahem* to dilate my cervix (sorry, should have warned you there). This was also uncomfortable, but at least it was short and quick.

Then came the long part of waiting. Waiting for my turn for surgery. Waiting for the dilation pills to take effect. Waiting for everything to be over. Hubby left for a while to get something to eat —the poor man hadn't eaten anything all morning. I also felt very hungry and thirsty even though I was technically being fed through the drip. I slept for a while, read a bit. Thankfully I also had a visitor - Diana stopped by for a while which helped to break the monotony a bit.

And then finally, "We're taking you to surgery now, Serene!" the nurse chirped. I felt both relieved but also a little nervous.

"Hey, should I call your hubby in to see you one last time???"
—Diana, concernedly.

Hmmm... like going to die like that. I told her I'd be fine.... I should be, right? I don't think the worst could happen. In any case, it's still okay to have Diana as the last face I saw on earth! :)

On the way to surgery, there were numerous more questions. "Is this your name?", "What procedure are you having", "Are you allergic to anything?". All to which I answered again and again patiently. Finally jokingly I said "Afraid you might have the wrong patient?". They returned my smile, "That's right, mistakes happen, so we just need to make sure!".

In the surgery room, a pleasant-faced doctor came up to me, introduced himself as Dr Tim and told me he was going to inject something to make me go to sleep. I felt something sharp and slightly painful as he injected some liquid through my IV. And then things started to spin around me slightly.

Dr Tim continued to chat to me, asking me where I was born, what I worked as, where I lived... I think I answered some of his questions. But I believe somewhere in the midst of his chit chat, I must have knocked out.

The next thing I knew, I was shivering with cold as I felt something being taken out of my mouth, and someone asking me if I was okay and telling me that the nurses will be coming shortly to take me back to day surgery. I remember asking what time it was before knocking out again.

And then I was back in the day surgery ward. The nurse came to attend to me, gave me some water, tucked in my blankets, and told me that she had informed my husband that I was out. Shortly after that, hubby came up beside me. We chatted for a while and I went back to sleep again. When I woke up, the nurse brought me a snack of cheese and crackers and apple juice, all which tasted soooooo good. Hubby remarked that I ate like I was starving.

And that was the end of 'My First Surgery'.

Perhaps I can consider this as some kind of closure. Although I still feel a little bit sad. But I think I'm strong enough to move on knowing that our babies (yes, apparently there were not one but two foetal poles in the sac) are in God's hands.