October 28, 2007
It's been a while since we took Christopher out. And today all the men in his family besides Christopher were down sick. Diana had to stay home to look after them, so hubby and I picked Christopher up to go to church today.

One of my (occasional?) readers is probably curious to find out how well her son behaved today without his parents around...

Well, I'm happy to report that he was a very good boy. It was pretty much like a normal routine Sunday. Dropped him off at the Little Bubbles room, he didn't even make a fuss when we said good bye. After church, we took him with us for lunch with the youths. He ate a small bowl of hor fun and kept himself amused playing with his cars. Some of the youths also helped to entertain him playing car racing on the table. 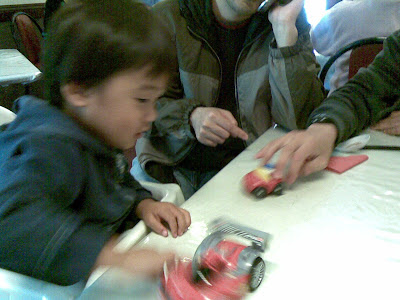 One thing I admire about Christopher is that he is the tidiest eater compared to other kids his age. When he took a mouthful of hor fun, he used his teeth instead of chomping down with his whole mouth, lips and all. The hor fun had a lot of gravy, so after almost every mouthful, he would reach for his napkin to wipe off the excess gravy from his mouth himself. He would have none of that mess dripping all over his chin and cheeks like most kids.

What a clever boy!