Our passenger of the day

July 22, 2007
Today we had the adventure of playing surrogate parents to little Christopher.

Ronald was at worship practice and Diana had to stay home to look after Daylan who is sick, so they asked us to help pick Christopher up for church.

He was very happy to sit in our car. For some strange reason, he seems to like sitting in our car very much... and kept himself amused, looking around and making funny faces with MH-koko. 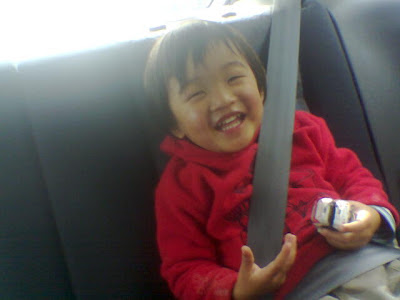 After church, he insisted on following our car to lunch.

Perhaps he just likes the variety of sitting in a different car for a change from seeing mummy's and papa's cars every day?

I suggested another theory of a subconscious memory of his papa's old Mitsubishi Mirage when he was still a baby?

During lunch at Emma's Seafood, he sat between Ronald and MH--it was quite a comical sight to see the two grown men looking after Christopher. Ronald was trying to get Christopher to eat his food, while MH was trying to keep him clean, wiping his hands and dusting away crumbs... haha, I found the scene very amusing to watch.

Anyway, he had grown so attached to our Mirage, he refused to follow his papa's car home. So we offered to send him home instead.

After all the excitement of the day, someone was starting to get sleepy... 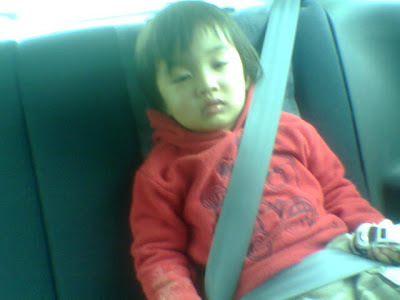 But it didn't last long. Once he arrived home, he was eager to show us his new toy--"Twacks!!!", his new car racing tracks set!

Sadly, our parting moment was tearful... whether it was because we were driving away in the Mirage that he had grown so attached to... or whether his playmate, MH-koko had to leave him to continue playing his "Twacks" alone... I couldn't tell. (OR maybe being the clever little boy he is, he knows that once we leave he will not be able to escape from nap time!)

But don't fret, Christopher... you can follow our car again next Sunday, okay?