June 05, 2007
This week is officially the last session for our Marriage Enrichment Course.

It's been quite an extended course - 12 sessions but held over the past few months. Because it was paused over certain busy holiday periods, plus we only have it once a fortnight anyway.

We had a pot bless before our final wrap up session to share what was the most significant thing we learnt in this course.

So our Mondays are free again.

But our pastor said that they might soon be starting another course on Parenting, which I will be keen to attend. I feel there is so much to parenting that I still don't know about. I guess I could just dive straight into it and still survive, because so many have gone before me and lived to tell the tale.

I think the most important thing I want to learn about good parenting is how to instill the right values in my children. 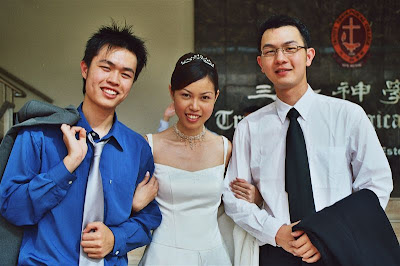 (My brothers and I -- like I said, we look totally different from each other)

Which is perfectly okay of course. I would definitely want each of my kids to be unique and different in their own special way. God specially crafted each one of us as a unique individual after all.

Values is another issue.

I've seen how different kids from the same set of parents grow up to have a completely different set of values. And I personally know one case where one sibling went off in a totally different direction to do something completely wrong from the values that his other siblings hold on on to. It's quite a sad case.

Of course many people argue and say that values are not only formed from childhood but are also a product of having different peers and experiences in life. Which is also true. But on the other hand, one can choose his/her peers to a certain degree. And one can choose his/her response to experiences. These are decisions which are made based on the kind of values the individual holds. Which again comes back to the basic values and principles which are formed from very early in life.

One can argue this and go back and forth continuously... it's almost like a chicken and egg issue... but I hope you catch a little of what I'm trying to say here... and can nod your head slightly if you can follow (somewhat) of the direction I'm heading toward. 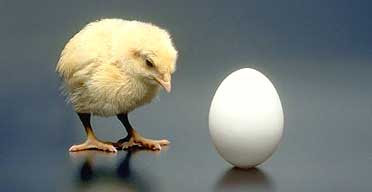 (Age old debate: Which came first? The chicken or the egg?)

Anyway, hubby and I were talking this over before bed. And one interesting conclusion we came to was this:

Most parents tend to have different standards for different kids. For example, in hubby's case he remembers that when he was very young, he wasn't allowed to watch TV at night. After his bath and dinner, he had to do his homework and study, and then go straight to bed. But when he got a little older, he was given a bit more liberty and allowed to stay up a little later to watch TV. But as for his siblings, although they were younger, instead of following the same rules/standards their older brother had when he was their age, they were allowed to stay up late to watch TV with the rest of the family. This is a very simple example, but I think it does illustrate the point.

Certain rules and standards are sometimes applied based on age and maturity. So taking the example of hubby's childhood, technically the same rule of no TV at night should apply to ALL the other siblings until (let's say) they were perhaps more mature to watch certain programmes that air later at night. This should be the ideal case. But of course in reality, circumstances can differ and that's why there are no hard and fast rules to this. But it's something to think about.