A little pain for pleasure

June 12, 2006
On Sunday after church, hubby and I headed down to Darling Harbour Jazz Festival to catch some live outdoor jazz performances. There going to be performances by string quartet Fourplay, and the legendary James Morrison, ending with a fireworks display at 7.30pm. 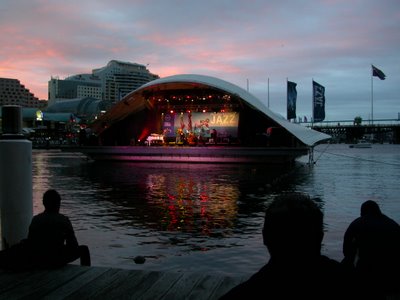 We sat down together with MH's recently married ex-classmate and his new wife. It was a very cold and windy day... we were all bundled up in coats and scarves, but I could still feel the chill creeping up as the sun went down. I was almost certain that hands and faces had started to turn a little blue.

But the cold was a small price to pay for such beautiful music... Fourplay was not bad, more bluesy/lounge type of jazz. James Morrison was just fantastic! They played a number of old jazz favourites and even a jazzy rendition of Greensleeves... I absolutely loved it! His band finished off their performance with a BIG drum solo which syncronised with the fireworks display... an amazing sight! Watching fireworks with a drum solo kick is truly an unforgetable experience.

An amusing thing that happened was that halfway through James Morrison's set, I turned to see how our friend's were enjoying it, the girl was enraptured by the music but we found the guy's head bent over--asleep! Imagine that!