April 15, 2006
Friday night, hubby announced that it was time to cut his hair. I knew we were in for a long evening. 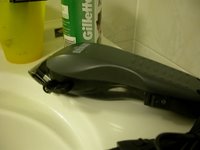 You see in February hubby had become the proud new owner of this hair clipper set.

He got it at the Subang Jaya Carrefour during our CNY trip to Malaysia.

He reasoned that instead of paying $12 for every visit to the barber, he could get this and DYI the haircut at home. Except that it was not actually DYI but HDIFM (Honey Do It For Me).

So I rolled up my sleeves and proceeded to get hairy. "It's very easy" said hubby, "Just set to medium and shave all around, then set to short to trim the sides and back". You think so simple ah? It was an ordeal for me because I was in constant fear that I would overshave a section and end up with the botak hair my brother Sam had one time because of his friend's mistake. 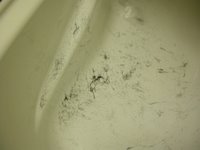 I took a long time doing this. Hubby was getting very impatient and tired from sitting in the bathtub. "Don't worry so much" hubby said, "If you make a mistake, just keep cutting bit by bit until it evens out". "Stay still and don't distract me lar!" I interjected.

Finally, over an hour later, I put down the clippers and sat back with a slightly pale look on my face. "It looks terrible!!!" I exclaimed. "No, it looks fine, thanks" hubby said nonchalantly. 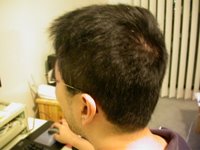 I looked at him incredelously as I surveyed the aftermath of the ordeal.

Anyway it's over and I wouldn't have to worry about this for say another 2 months at least?