Christmas pressie for himself

December 23, 2005
Last night we went Christmas shopping. Westfield shopping centre in Burwood was packed with shoppers with late night shopping extended to midnight. So exciting! We walked around Myer and looked at all the pretty and shiny new things. I was itching to buy a nice new solid good-sized cooking pot (Oh man, I really am turning into a Stepford wife!). In the end I settled for a little stopper so I can keep olive oil in old wine bottles and drizzle them over salads like a professional. Cost $2.60 after 25% discount.

My beloved hubby on the other hand was more extravagant. He spotted the DVD boxed set of the transformers animated series and went absolutely ga-ga over them. He spent a loooong time poring over the sets, contemplating the "to buy, or not to buy" question. Then we went all over the entire Westfield shopping centre to see if there were better deals in other shops. There were none. So it was back to Myer once again. He couldn't decide which one to buy, so he bought both Season 1 and Season 3 DVD boxed sets. Season 2 sets were out of stock much to his dissapointment.

Once we arrived home, we couldn't wait to start watching the first DVD and finished the first 2 episodes. The familiar refrain of the theme song "Transformers... More than meets the eye..." came through the TV speakers... and I remember hearing that same tune every Saturday morning as my brothers plonked in front of the TV to watch Optimus Prime and the Autobots battle it out with Megatron and the Decepticons. 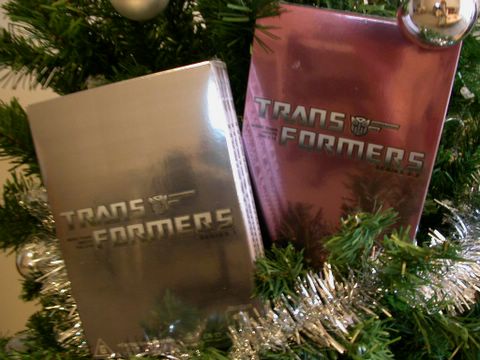 This Transformers thing has gotten bigger than we imagined. Almost every boy owned his own action figure of Optimus Prime or one of their favourite Autobots. In fact we have a friend who still meticulously collects Transformers action figures, even though he's way past his childhood. Apparently, he makes good money selling them to other avid collectors.

Well, inside every man is a little boy. And boys will always be boys. I am glad my hubby found a Christmas present he really likes. He'll probably also say that this DVD boxed set will be something like a legacy to pass on to our kids in the future.

P.S. We're going out again later tonight to another Myer outlet in the city to see if he can get the Season 2 DVD boxed set. Boys!